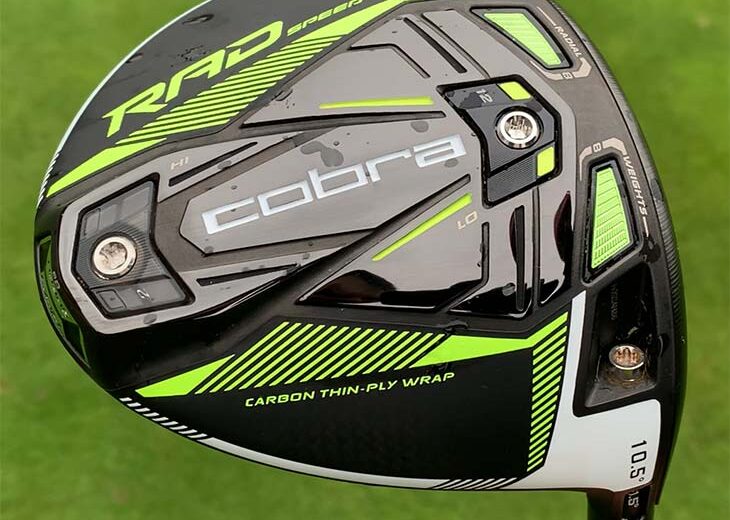 Cobra Radspeed Drivers Review – In recent years, Cobra have struck a nice balance within the golf driver market. It has the longest driver of the golf ball on the PGA Tour as it’s leading athlete and is also the go to club amongst players in the amateur game. Not bad at all. 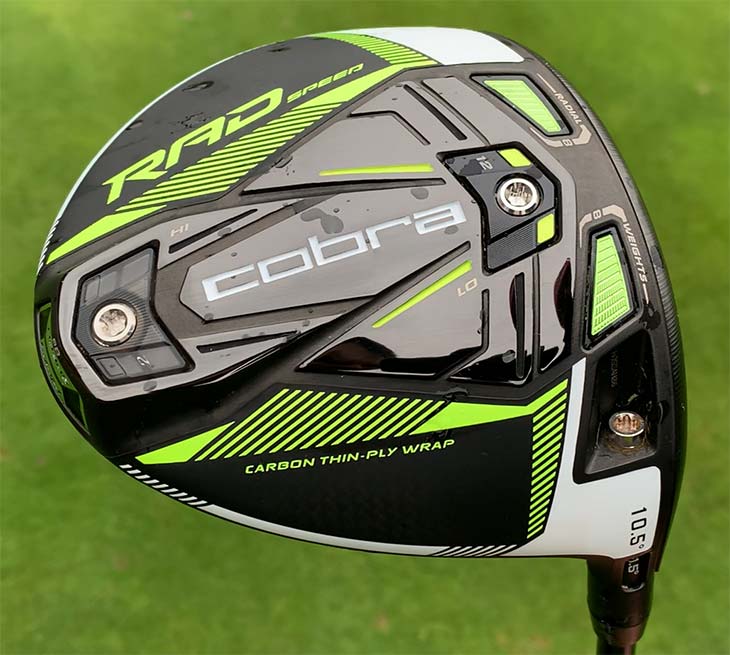 Going back a couple of years to the F9 Speedback driver, it is, to it’s credit, still proving to be the go-to driver when searching for the best value big stick online. Last year’s Speedzone driver range really impressed me too, and I thought both models had something to offer. Cobra continues to produce drivers that are cheaper at retail than the ‘big four’, whilst matching them in performance. Pound for pound the best value driver on the market? You’d have to say so…

This year’s model attempting to carry on this trend of success is the Cobra King Radspeed. Once again the price tag starts with a 3 and not a 4, which psychologically is a huge difference for price conscious golfers. The name was inspired by a radial weighting concept originated from a popular formula in engineering called the ‘radius of gyration’.

Although this term may seem a little confusing to many, it’s easily explained: Cobra are increasing the distance between the front and the back weights in the club head. Cobra claims that this therefore creates the perfect blend of faster ball speed, low spin and forgiveness.

Before I really get into the nuts and bolts of the review, a word on the name. Forgive me Cobra but when I hear the word ‘Rad’ I think of 90’s American films and TV series’. Bill and Ted eat your heart out.

Instead of the usual two models in Cobra’s driver line-up, this year there is three:

– Radspeed Xtreme Back – For players who want distance through faster ball speeds and consistency across the face in the form of forgiveness and stability .

– Radspeed Xtreme Draw – For those who want distance while reducing their slice or creating a draw. Weighting in the heel and a straighter neck makes the head look less offset at address. Cobra claim this is their longest draw biased driver ever.

If you’ve read anything about Cobra Golf in the last 20 years, you would know that a new driver means new technology, and plenty of it too.

Radial weighting, as previously mentioned, is the main technology story here – it’s all about creating as much distance between the weights at the front and back of the driver head. Cobra’s engineers have supposedly discovered that by increasing the radius of gyration and the distance between the front and back weights, they could create the perfect blend of fast ball speed, low spin, and forgiveness in one driver.

Finally, the eye-catching CNC milled infinity face remains. Apparently it requires about 25 minutes of milling for every single club face that Cobra produces. The lack of hand polishing produces a 5 times more consistent face thickness and bulge. As you’ve heard before, this time consuming and thorough process should ensure consistent performance on every new driver, which delivers thinner faces for maximum ball speed and perfect curvatures for forgiveness on off-centre hits.

I tested the Radspeed and Radspeed XB inside at LSH Auto Car Garage using Trackman 4 and Titleist Pro V1x’s to compare the data directly against last year’s Speedzone and Speedzone Xtreme models.

I then took the Radspeed drivers to Reddish Vale Golf Club, played some holes and tested them on the golf course to see how they performed when it really mattered.

The Cobra Radspeed, as expected, is a 460cc head size, the shape and patterns on the head are very similar to the Speedzone, however the crown is finished in a matt black, not the carbon fibre/gloss finish we’ve been used to seeing from Cobra over the last few years. Personally, I prefer the matt black finish, its personal preference but it suits my eye more.

The standout yellow colour has been replaced by lime green, on the sole of the club you can see the weights further apart and there are a few ‘go faster’ stripes on it which may appeal to some golfers. The milled face still wraps over the crown and the Cobra logo is still there for a simple alignment aid on top of the crown.

The lack of twisting at impact in the head of the Radspeed driver is really impressive, like with last year’s Speedzone the head is very stable through the hitting zone which is always a good attribute for a driver to have. I have tendency to turn the club left which I found very hard to do with this club.

The strike and sound feel solid too, in a players club I normally notice less forgiveness during my inside testing and this was apparent here again. Out on the course I could certainly tell the difference in the Radspeed and XB but compared to other lower spinning drivers on the market it is more forgiving.

Shape and patterns wise looking down at this driver it is the same, if not very similar to the Speedzone Extreme, it still has the gloss finish, but the yellow colour has been replaced by lime green. It’s great that Cobra offer a range of drivers in different finishes to suit certain players’ eyes but I’m not sure what you would do if you want the XB, but prefer the matt finish?

I found that it sounds slightly louder than the Radspeed but once again it was such a stable head. You know that feeling at impact when the club can twist in your hands with some drivers? I just don’t have this as much with the Radspeed range as I do in other manufacturers which really impressed me.

Inside on Trackman 4 the Radspeed performed very straight and consistently but I didn’t find it to go any further than the Speedzone drivers unfortunately. The numbers were nearly exactly the same.

As I found in last year’s testing of the Speedzone and Speedzone Xtreme the numbers between Radspeed and Radspeed XB were also incredibly close, the only difference was a touch more height on average and my bad one (the skinny right shot) was over 3000rpm of spin. This is however is what you would expect as the XB is higher spinning, launching and so more forgiving.

That’s what always amazes me with the Cobra drivers though, you can pick them up and get straight into hitting shots (especially as like all you other English golfers I have had 4 weeks off) and they help you out. It’s very nice on the eye and incredibly forgiving off the face.

It took me a while to get into the Radspeed driver on the course, I missed my first few shots to the right which was unlike me and I struggled to find my draw. It was cold and I had a few layers on so this wouldn’t have helped but it’s worth noting that its more of a right side of the golf course club than a left side (if you are a right hander). Once I got warmed up the flight was back to a lower and flatter shape.

Another consistency in testing was that once again there was a notable height and straightness to the XB compared to the Radspeed. The Radspeed was lower in flight, rolled out more and so created more distance. The XB was a ‘loopier flight’ but more straight and more forgiving.

Inside on Trackman there was no difference in height and total but on the course the difference in total yardage was Radspeed averaged 8 yards longer. Even when I felt I’d hit the XB out of the screws it was still shorter. However, this is my shots remember and I carry the ball further when I get the flatter shape as I generate more dynamic loft than I would like and hit up on my drivers. A lower flight does not always mean a further carry so make sure you are aware of your tendencies and get fitted with your local professional to maximise your capabilities.

One other area that really impressed me is that amount of customisable lofts there are with the Radspeed driver: from 1.5 degrees lower loft to 1.5 degrees higher loft and a D setting in one head.

In the women’s models there is no Radspeed available but Radspeed XB and XD is with a Project X Even Flow Riptide shaft and Lamkin Crossline (58R). it’s worth mentioning again also that Cobra have stuck with the Cobra Connect smart grips with Arccos technology once again. If used correctly, a real benefit to any golfer.

These drivers look better than the Speedzone but don’t perform any different in terms distance and carry, I felt they were an improvement in stability though. So the radial weighting looks to benefit in the forgiveness area not length. There was no difference at all in the numbers I saw on the Trackman. To be fair the Speedzone really impressed me so it really didn’t surprise me that there wasn’t much improvement.

So, no need to upgrade if you already have the Speedzone but certainly worth a try if you aren’t gaming a Cobra currently. I imagine the second hand and older models will keep their value in a market which is stronger than ever thanks to golf’s resurgence in 2020. Once again Cobra pack the technology into a fabulous looking head and keep the price below their competitors which has to be applauded.

Who are they aimed at?

The Cobra Radspeed drivers are aimed at golfers who are price conscious but still want the best technology and performance available.

Well done Cobra, once again you have catered for the everyday golfer and the professional. The F9 Speedback was the best selling driver, demand outstripped supply, the Speedzone was once again a surprise contender and the Radspeed has confirmed to me that Cobra have broken into the top flight of drivers and should be on everyone’s mind when wanting to upgrade their driver.

Absolutely! The King Radspeed drivers are fantastic. I prefer the Radspeed model due to the lower more chasing ball flight I achieved. Once in the bag I would need to channel my inner Bryson and Lexi…