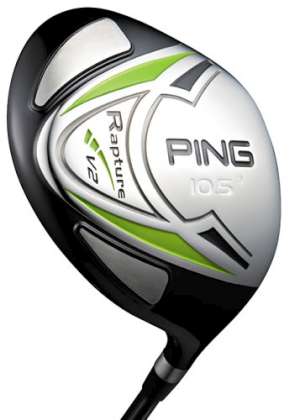 Ping Rapture V2 Driver Review – Ping launched the original Rapture range in 2006 with the aim of combining a variety of materials to produce the most technologically advanced clubs they could.

This proved popular and now Ping has improved these clubs further with the launch of the excellent Rapture V2 range and it is the Ping Rapture V2 driver that has probably undergone the biggest change.

Gone is the composite graphite/titanium head in favour of an all titanium head with external tungsten weight pads instead of internal weighting. Compared to the previous version, the head is slightly longer back to front with a higher MOI that improves both distance and accuracy.

In our tests the Rpature V2 was a joy to hit and the new titanium head gave a great powerful sound at impact. Even with the increased stability in the head, it was still possible to move the ball left and right easily.

If money is no object then this is one of the very best drivers on the market, but the Rapture V2 range does not come cheap and we are not sure this V2 is £100 better than the Ping G10 driver, which is a fantastic driver in its own right.