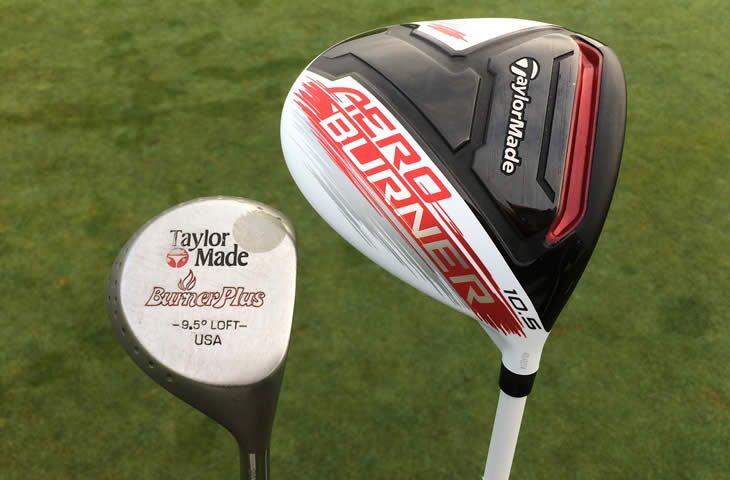 TaylorMade AeroBurner Driver Review – TaylorMade first introduced the Burner name with their original metal drivers and since then it has come and gone a few times, most recently when it was surplanted as the ‘hot’ brand by the RocketBallz family. Now it is reincarnated again in the AeroBurner driver and the difference with the original driver could hardly be more different. 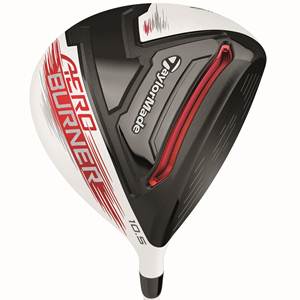 As we are used to now, in order to get more distance you need to make the club head move faster and there are a few classic ways to do this such as having a longer shaft, a more aerodynamic head and a lighter overall weight. TaylorMade has used all of these in the past, but maybe have got away from doing them all in recent models. In the AeroBurner driver they have gone for a package that brings all three back together again.

As well as being different from the original Burner, the AeroBurner is also quite different to the TaylorMade JetSpeed driver that it replaces. The JetSpeed failed to really take off, which I was quite surprised about as it was cheaper and more forgiving than the SLDR driver and quite a few tour players put it in play too.

One of the possible reasons was that is was quite conservative in its looks, which you cannot say about the AeroBurner with it’s white crown and red paint job.

It’s meant to have shelf appeal for the ‘grip it and rip it’ crowd and I think it certainly does, especially with the number 1 in relief on the sole, but what else does it offer?

Where the JetSpeed led the way with Speed Pockets for drivers, the AeroBurner turns the gentle smirk into a big grin with a Speed Pocket that is twice as long and much deeper and wider.

This increases the ball speed on off-centre hits to reduce the loss of distance and certainly the club felt very forgiving. I also liked the sound at impact, which was fairly tame for TaylorMade, but was still a lively crack combined with a solid thump that put a smile on your face.

The other thing you notice when swinging the club was how light it felt. The Matrix Speed RUL-Z (do you see what they did there?) 50 gram shaft keeps the white theme going and is very light. I tried a stiff flex and it was actually pretty robust, although the weight of it may not be heavy enough for higher swing speed players.

It is a now average length for TaylorMade drivers at 45.75 inches, but I have to say that it did not look or feel like it when you addressed the ball or swung the club.

The final aspect of the design is the aerodynamics and TaylorMade has used a textured crown with a smooth raised centre section to help the head slip through the air. This combines with the Aero Hosel, which is a small fin attached to the back of the hosel where it joins the head.

It is tough to do a direct comparison on the speed of the AeroBurner against the JetSpeed as it is a different shaft and there is no adjustable hosel on the AeroBurner. However the AeroBurner did feel lighter and certainly not slower.

The aerodynamic claims all makes sense though and if you need assistance with getting the ball going then the AeroBurner is going to be better than the JetSpeed, not only because of the reduced weight, but also because it launches the ball higher with more spin. If you are between lofts then it could be a case of lofting down rather than up.

Some high swing speed players over around 95 mph may find the set up of the AeroBurner is too light, in which case there is a TP option with a 2° flatter lie and and a choice of 45 inch heavier shaft. This could be a good fun club, but you will have to pay an extra £70 and that is only £30 short of what you could have a TaylorMade R15 driver for, which also offers more adjustablity options.

Overall I have to say I did like the TaylorMade AeroBurner driver because it sounded great, felt good and put a smile on my face when I was hitting it and if a club does that to you, then it is usually on the right track.

Unfortunately it is not for me because as a 100mph swing player in the standard set up, it is too light and puts too much spin on the ball which increases the trajectory. I could trade up to the TP version and I am tempted, but for similar or less money I could get an R15 or several other drivers that have better set ups for my speed of swing, with adjustability thrown in too.

However if you are a paid up member of the ‘grip it and rip it’ club and have a medium to low swing speed and want a driver that is light enough to swing fast with lots of forgiveness, then the AeroBurner is hot for you.