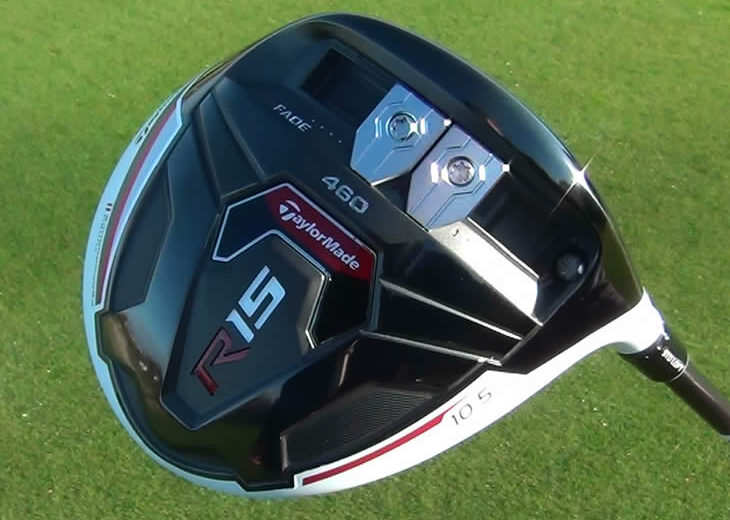 TaylorMade R15 Driver Review – Unfortunately I am old enough to remember when TaylorMade introduced the first R series driver with the R300 series. Since then they have given us the R500, R5, R7, R9, R11 and then the chronologically challenged R1 before surprisingly ditching the R name for the loft up message of the SLDR driver.

The SLDR driver may not have been the most commercially successful driver TaylorMade has ever done, but it did herald their new philosophy of low forward centre of gravity (CG) and low spin for more distance. 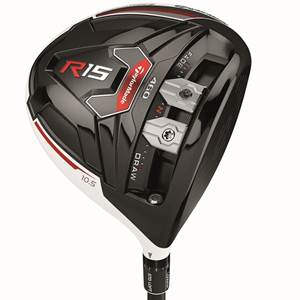 Now TaylorMade return to the R brand name that served them so well in the past with the R15 driver and are building on the low forward CG message to hopefully get the best of both worlds.

It is good to see the R name back and the larger profile of the R15 quickly sets it apart from the taller and more compact SLDR, even though both are 460cc heads.

As you can see the white crown is back too. Having been told white was the answer to all alignment issues with R11, TaylorMade went to the dark side with the black crowned SLDR and now the R15 is back in white. With a black option, just in case.

I am easy about this, as having a white crown and a black face does make it easier to align, but why then does the R15 with the black crown have a black face rather than a silver one like the SLDR? It could be a trend thing or maybe black R drivers are destined to be dark, as the R1 Black had a black face too.

At least they are going back to what they know works and more importantly sells, even if at first glance there is not much visual difference in the crown graphics from the R11 driver to the R15 and its plain white head.

Enough about colours and names, the real difference with the R15 driver is the Front Track, which has evolved from the SLDR by making it longer and adding a second weight. The SLDR has one 20g weight whereas the R15 has two 12.5g weights giving you an extra 5g of CG moving fun.

The Front Track is also 12mm closer to the front edge of the R15 face, so now the channel acts like a Speed Pocket to allow the face to flex a bit more so you get less fall in ball speed and hence distance on off centre hits. This design also moves 40g of weight closer to the face than on the SLDR, resulting in 75% of the total mass of the driver being low and forward.

This is where the low and forward CG message comes in as that is good for ball speed and distance, but sometimes not great for forgiveness. I had to check this out.

Right from the first swing I could tell this was a completely different club to the SLDR. For starters it was much easier to get it in the air. Compared to the SLDR in the same loft setting, the flight was much higher wherever I hit it on the face and the face was more forgiving too.

The SLDR was good if you hit it out of the middle, preferably with a higher swing speed. If you didn’t, then the performance suffered and this is where the R15 driver makes the difference by giving more forgiveness and a better flight with less effort.

Using Trackman I could see that the spin rates were about the same as the SLDR with the two R15 weights together in the neutral setting in the middle.

The sound throughout was really good without being too high pitched or shouty, which some TaylorMade drivers have been in the past.

The two sliding weights on the sole also make a difference. I started with them both in the middle and the effect was to give a much more solid strike as the mass is directly behind the ball, which should in turn give more distance.

Unscrewing with the supplied wrench and sliding both weights together to the full draw and fade setting did change the shape of shot I produced, but in a reasonably subtle way. With the weights towards the heel it had the effect of changing a straight shot to a draw rather than anything that will straighten up a raging slice or vice versa.

I then moved the weights apart with one at each end for the most forgivness as the stability of the head is increased in this setting. On Trackman it showed an increase of 300 rpm in ball spin and a 7% increase in trajectory height compared to having the weights in neutral, which is what I expected, so the Front Track is doing its job. Again it did feel more forgiving and the sound was a little hollower than the nice solid, but fairly muted sound of the neutral middle setting.

What I do like is the option to tighten the weights at any point along the Front Track and there are 21 possible choices. This enables you to fine tune the CG location so you can get exactly the right balance of weight from heel to toe in a place that makes it the best club for you, rather than the nearest best alternative determined by the manufacturer.

There is also an adjustable hosel allowing up to +/- 2° of loft changes with a standard or upright lie and that is all in one head. In addtion there is a choice of 4 heads in lofts from 9.5° to a new high of 14° in both colours, plus a 430cc head option in white only. Therefore custom fitting of your R15 driver is esential to get the right head, then the right loft, lie and weight settings to get the best out of it.

The R15 shaft is a similar Fujikura Speeder 57g to the SLDR and the length is a manageable 45.5 inches, which was one of the best things about the SLDR and is great to see this being continued.

The final touch that is worthy of mention is the retro white headcover that has a leather look and feel. It looks very classy even though it does not have a shaft sleeve, but most golf bags these days should have enough protection. I am not sure how white it will stay on the courses I play, but it does look good out of the box and stays on the club well.

When you take that lovely headcover off to reveal the new Front Track, you get this feeling the the R15 is all business, as R drivers have been in the past. And when it comes to the business end of the driver then it does deliver, which it really has to as this is not a cheap driver and visually it looks like the R11.

The R15 is much easier to get going than the SLDR and the adjustabiity from the sliding track and the 4 loft options should enable you to get the most distance from your swing and provide a good level of forgiveness.

In the last year the driver market has seen a re-alignment and there are several good models out there with different CG strategies on how to pulverise a golf ball. TaylorMade may have gone back in time to the R name to go forward, but with the R15 driver they have a quality driver that will be a strong contender for the number one sales position.