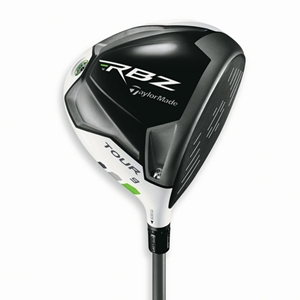 TaylorMade RocketBallz Tour Driver Review – The TaylorMade RBZ Rocketballz Tour Driver is similar in features to the standard RBZ driver so it has the adjustable hosel and the same white paint job. However that is where the similarity ends.

Firstly the shaft is an inch shorter and is a much stiffer and better quality Matrix shaft than the standard version, but this comes at a price. Secondly the head is a different shape that is taller and more triangular than the standard version. This does give it a lower, more penetrating flight, which is better. However we don’t feel it looks as good and the sound is much more of a high pitched clunk, which is disappointing in what is supposed to be a better player premium driver.

With the previous Burner Superfast model we preferred the TP version over the standard version, but with theTaylorMade Rocketballz driver it is the other way round. The standard driver looks better, sounds better and is cheaper.

We would probably prefer the R11S over the RBZ Tour, which is also cheaper, so this is really going to come down to personal preference and how much adjustability you want in a driver.