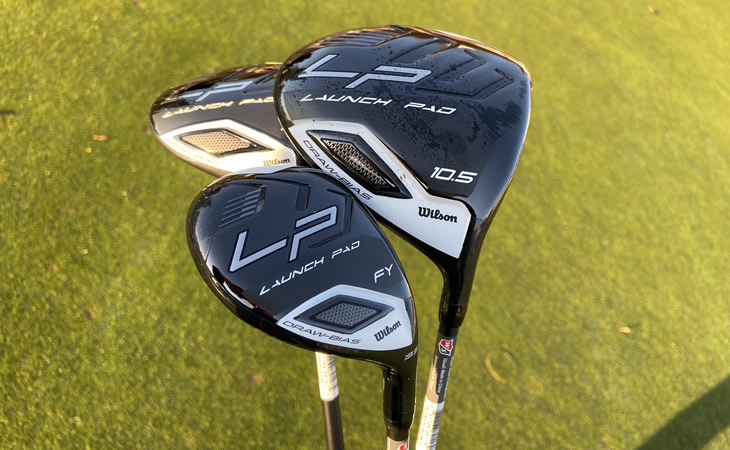 Wilson Staff Launch Pad Woods Review – Do you struggle with a slice? Are you looking for a golf club which is designed to help you draw the ball and maybe also help out those golfers who don’t swing it quite as fast as they’d like to? 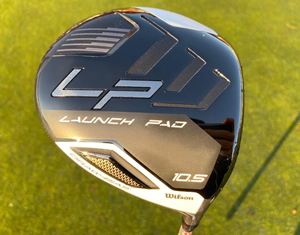 If that’s you, you’re going to want to keep reading, because the Wilson Staff Launch Pad Woods could be the answer.

With driver, fairway woods and a new FYbrid model all available, the woods feature an offset hosel which should help provide both more consistent striking, and better dispersion on your shots. Hopefully no more balls starting on line before carving off into the right trees!

A feature throughout the clubs is the movement of the CG (Centre of Gravity) further forward and towards the heel of the club – visible by the black pad on the sole of each – which is perfect for those who tend to swing out-to-in, as it should help square the face up at impact and negate any fade bias.

We see this new range as literally the launch pad to improve the fortunes of golfers starting out and those wanting to lower their handicap to enjoy the game more.

The features in the Launch Pad clubs will deliver confidence to those who need it and help those players who struggle to hit the club face consistently – experiencing loss of distance, control and accuracy as a result.

I took the Launch Pad Woods down to Bramall Park Golf Club in Manchester for some testing. It was cold, breezy and wet, so hitting some fairways and giving myself some chances going into the greens was going to be vital.

I wanted to see how the offset on these woods would affect my ball flight, as well as testing them up against my existing set to compare performance.

This super-lightweight driver is one of the lightest that the brand has produced, at just 272g. Wilson is hoping that this is going to translate into better clubhead speeds to help produce greater distance without any more extra effort.

To further assist this, Variable Face Technology works to keep ball speeds up across the face for more consistent results, making it perfect for higher handicap golfers who (generally) don’t strike the ball out of the screws every time.

The driver features a draw bias, visible via the offset look at address, as well as 13 grams of weight in the heel and a +2˚ upright lie angle, which helps to keep the toe rotating and closes the face more at impact. Wilson says that this could help reduce the frequency of that dreaded slice by over 50%!

The look of the sole reminded me a little of the old TaylorMade M2. Despite being a game-improvement driver the looks were smart, simple and premium. I think it’s a good blend of showing off that there’s some tech inside the head, without things being too cluttered.

I liked the grey finish on top with the small bits of detailing on the crown, including a simple alignment sign and a small white rim around the back of the crown.

However the offset was instantly noticeable and whilst it may fill plenty of golfers with confidence that they aren’t going to miss the ball right quite so often, I found myself almost trying to override this when I put the club down by the ball.

Wilson obviously have a very clear target market for the Launch Pad range but I also feel that they are alienating plenty of higher handicappers who want more launch and forgiveness, but don’t want the offset. Perhaps a choice of two models would be more appropriate?

The driver felt pretty good off the face, although most of the attention turns to the sound once you make contact. It’s a loud, high-pitched whack which will leave none of your playing partners (or anyone in the near vicinity for that matter) in any doubt as to who has just teed off.

As I mentioned in the Cleveland Launcher HB Turbo review recently, this kind of feedback may suit some people, but I’m afraid it didn’t quite do it for me.

Wilson are claiming that this is going to help with people who lose the ball out to the right, and I have to say that throughout testing my ball flight was consistently straight, and the fairways that I missed were all off to the left.

However the ball flight was a little higher than I would usually like to see, and I felt as if I was actually losing distance for my efforts because the ball was climbing upwards rather than getting through the air. This is probably also due to the fact that this driver is 10.5 degrees and features a regular flex shaft, which doesn’t really suit my swing speed and ball flight.

This also affected distance too, with drives using the Launch Pad driver consistently finishing 10-15 yards behind my current driver, although I was impressed by its overall forgiveness as a couple of off-centre strikes still performed well.

Available in a 15° 3 Wood and 18° 5 Wood, the Launch Pad fairway woods (RRP £149) are designed with the same 2 degrees upright lie angle as the driver, and the whole club aims to deliver a lightweight option with a Carpenter Custom 455 face to deliver control, feel and distance.

Fairway woods are a little easier to shape than a driver as a general rule, and so although I found it to be really easy to hit, it was also turning over a little too far left despite the fact that I was aiming to the right of the fairway.

I always think it’s quite difficult to find a fairway wood which performs just as well off the tee as it does off the deck, but I was really impressed with the Launch Pad in both aspects. I was able to find a couple of fairways on holes where driver off the tee was not necessary, and also put it to good use on the long par 5 6th to leave myself just a gap wedge into the green, proving that it can be versatile too.

It produces a nice, high ball flight with plenty of carry distance which is ideal for the winter. If you’re not that confident with your fairway woods then this could be a really good option because it really is a forgiving head and there’s a nice pop off the face when you make contact.

Wilson are ‘launching’ the new FYbrid as a category of its own for higher handicappers seeking another game improvement option. They say it can replace a 3 iron, 3 hybrid or even a higher lofted fairway wood.

The FYbrid (RRP £129) provides a confidence-inspiring look at address. It’s basically right between a hybrid and a fairway wood, with a chunky rounded head that still features a little bit of offset, although not quite as pronounced as on the driver and fairway wood.

Having this extra bit of bulk towards the back of the crown may actually help some golfers, as it will move the weight a little further back to allow for an easier launch, and I could actually see this out on the course. It is one of the easiest woods I have ever used when it comes to getting the ball up in the air with minimal effort.

I even tried the hybrid from a variety of lies and, despite the very soft and wet conditions, the FYbrid performed just as well from thick rough as it did from the fairway.

At 19.5˚ I could see this becoming a firm favourite for many golfers as a club that they can really rely on when they need to hit the fairway, or to get them out of trouble on certain holes and stop those card-wrecking scores.

I will start the verdict by saying that these golf clubs are not for everyone. With regular shafts, plenty of offset and some pretty interesting acoustics, you will probably find that the ‘better player’ would not even consider trying the Launch Pad range, let alone put them in the bag.

I have to say that I’d be the same, because the ball flight was too high and my swing speed was a little too high to get any real benefit either.

However, Wilson had a specific golfer in mind when designing these clubs, and they are perfect for these people. When testing equipment it is always important to address whether the club does what the brand are promising it will do – and in this case it certainly did.

I didn’t miss the ball out to the right once, even when trying to hit a couple of fades, and was able to draw the fairway and hybrid in particular with ease.

These woods are ideal for casual or beginner golfers, or those players who want to pick up a little club head speed whilst getting some help with their over-enthusiastic fade. Easy to hit, forgiving, decent performance, smart looks and at prices which won’t break the bank. All in all, pretty good.