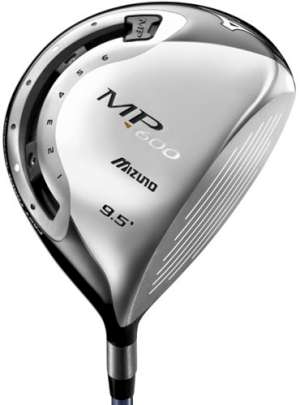 Mizuno MP-600 Driver Review – The Mizuno MP-600 driver uses weights that sit in a Fasttrack channel on the rear of the clubhead to allow you to modify the shape of shot.

They are adjusted by the use of an allan key supplied in a clever little pocket in the headcover and this is a relatively easy process.

There are six distinct locations for the weights giving 15 possible combinations as shown on the handy instruction card, but you can also fix the weights between these points for even more flexibility.

As you would expect you can create a draw or fade bias by putting the weights to the heel or toe respectively. There also several neutral positions which increase or reduce the spin on the ball for a higher or lower ball flight, which we thought was more useful.

So does the Mizuno MP-600 driver work? Yes but it is quite subtle. If you have a big fade then the draw setting is not going to cure it. However make a normal swing and you should get the shape of shot you require.

The head is very classy looking, sits very well behind the ball and, depending on where you have the weights, the sound is very good too. Performance wise length and forgiveness were in the ballpark you would expect in this class of club.

However make sure you only move the weights between rounds and not during a round as doing so will get you disqualified!