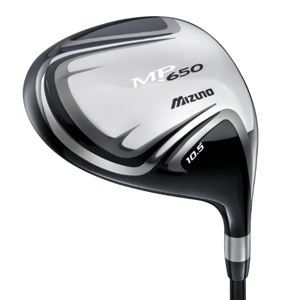 Mizuno MP-650 Driver Review – The first thing you Mizuno MP-650 driver at address is the very clean classic looks. This is a very no-nonsense club and it is squarely aimed at the better player.

The MP-650 head shape has been subtly altered from the previous model to have more of a pear shape. Weight has been moved from the inside of the back of the head to the outside to give the toe a more rounded appearance from above which Mizuno say is what better players like and it does look good.

What this also does is make the toe heavier so it will open the face at impact and create a fade. To offset this a little Mizuno have placed a 6 gram weight in the heel of the club. Even with this balancing act the Mizuno MP-650 driver will consistently produce a straight shot or slight fade.

It is also almost impossible to create a draw with this driver, which what pro’s want but given most amateurs fade the ball, the MP-650 may have limited appeal.

Aside from that, the trajectory was medium to high and we had to drop a level of loft to get our usual trajectory back. The sound was very good, as was the feel, something the Mizuno MP woods have been getting better at each time.

The Mizuno MP-650 driver is a quality driver for those looking for control and to take the left side of the course out of play.